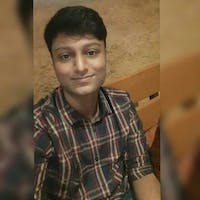 I'm Sai Ashish and today, I'm going to show you how to build the traditional Magic 8 ball game using Python😍

How psyched are you for this build? Let's get started 🚀

What are we going to learn today? 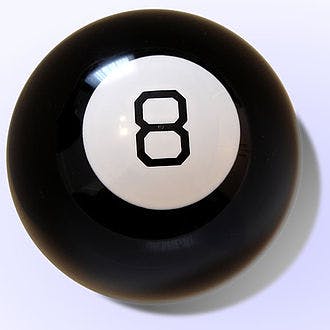 The Magic 8-Ball is a plastic sphere, made to look like an eight-ball, that is used for fortune-telling or seeking advice. The user asks a yes–no question to the ball, then turns it over to reveal an answer in a window on the ball🎱

Let me tell you a secret real quick🤫 In reality, the Magic 8 Ball, just picks out random answers from a pool of possible answers embedded into it. There is no actual processing involved. In this build, we are going to achieve this magic using the Random module.

3. The Random Module, the Time module & the Pyfiglet Module

a. The Random Module

To help us build this game, we are going to use an amazing module of Python called random. The random module generates random numbers for us. This gets in real handy as we do not want our computer to be biased.

b. The Time Module

The time module provides various time-related functions. We use it to retrieve the system time and display it on the screen. You can access the official documentation form here📄

Before we dive into the build, I'd like to introduce everyone to an aesthetic module of Python, The Pyfiglet Module. Aesthetic module? What do you mean?

Yes, aesthetic. The Pyfiglet Module converts ordinary looking text into creative word blocks in just a line of code. An example of this can be seen in the image below:

To install pyfiglet into our system, open your terminal and type the following command: 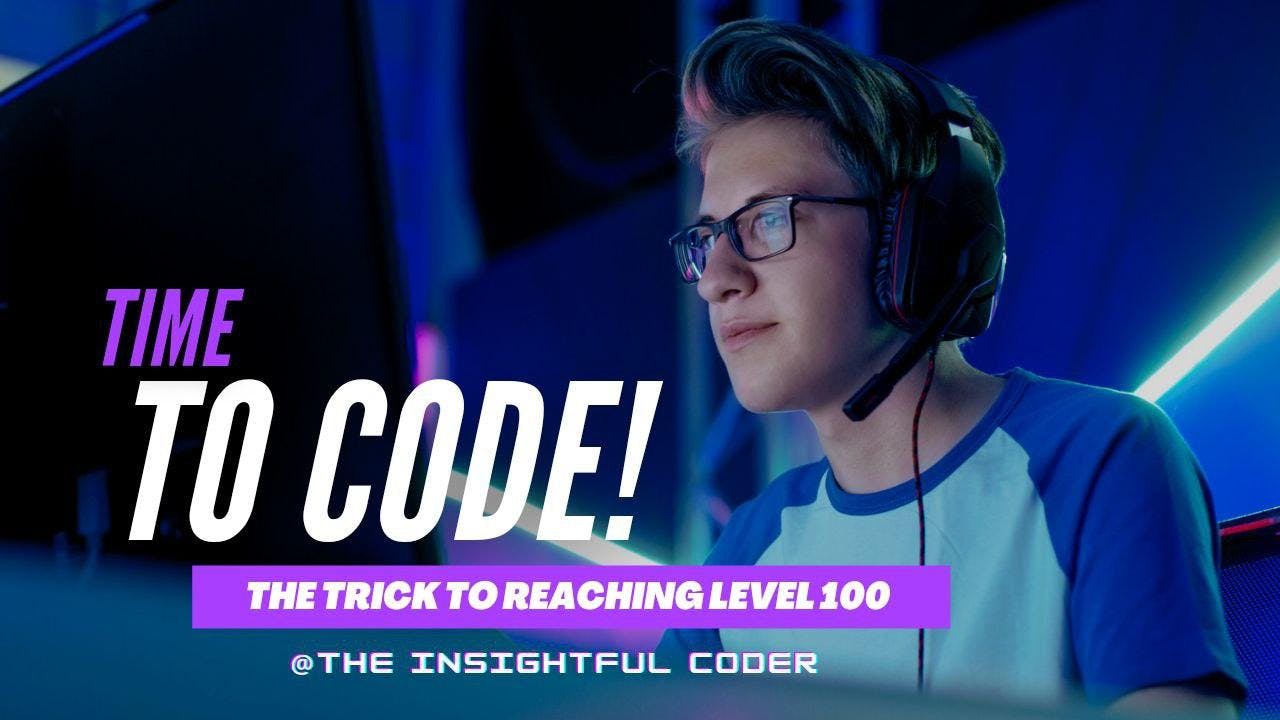 The first step is to import the required modules:

Let's define a function named magic8ball() which greets the players of the game and takes their name as an input.

We define a function by using the define statement as:

Asking the player for their name:

Inside this function, let's call another function called magic_questions()

The process of calling one function inside of another function is called Recursion.

Inside the magic_questions() function, we store the 20 default answers originally stored inside of the Magic8Ball inside a variable called answers. The random module will choose one of the answers by itself and display it to the player.

Now, we want to ask the user to input his question for the purpose of fortune-telling/ advice seeking. Sadly, the answers are random and not related to the questions in any manner. Therefore, we would ask the users for input but wouldn't store it anywhere.

To simulate the feeling of a real game, let's add some text and a delay between them so that it seems that the computer is actually thinking and generating the possible answer!

The answer is picked out at random. We use the randint() function of random to pick out the answers.

After a delay of 3 seconds, we ask the player if they want to play again. The replay will be taken care of by the Replay() function we are about to define next.

We ask the player if they want to play again and store the response in lowercase using the lower() function.

If the user wants to play again, we redirect him to the magic_questions() function and the game resumes the same from that point. If no, we'd stop the execution of the program using the exit() function. If the user enters anything else, we ask the user to re-enter his choice as it wasn't clear. The benefit of using the lower) function in the above line was that if the player inputs their response but is clumsy about the capitalisation, it could be taken care of.

Finally, we call the magic8ball() function to execute our game. 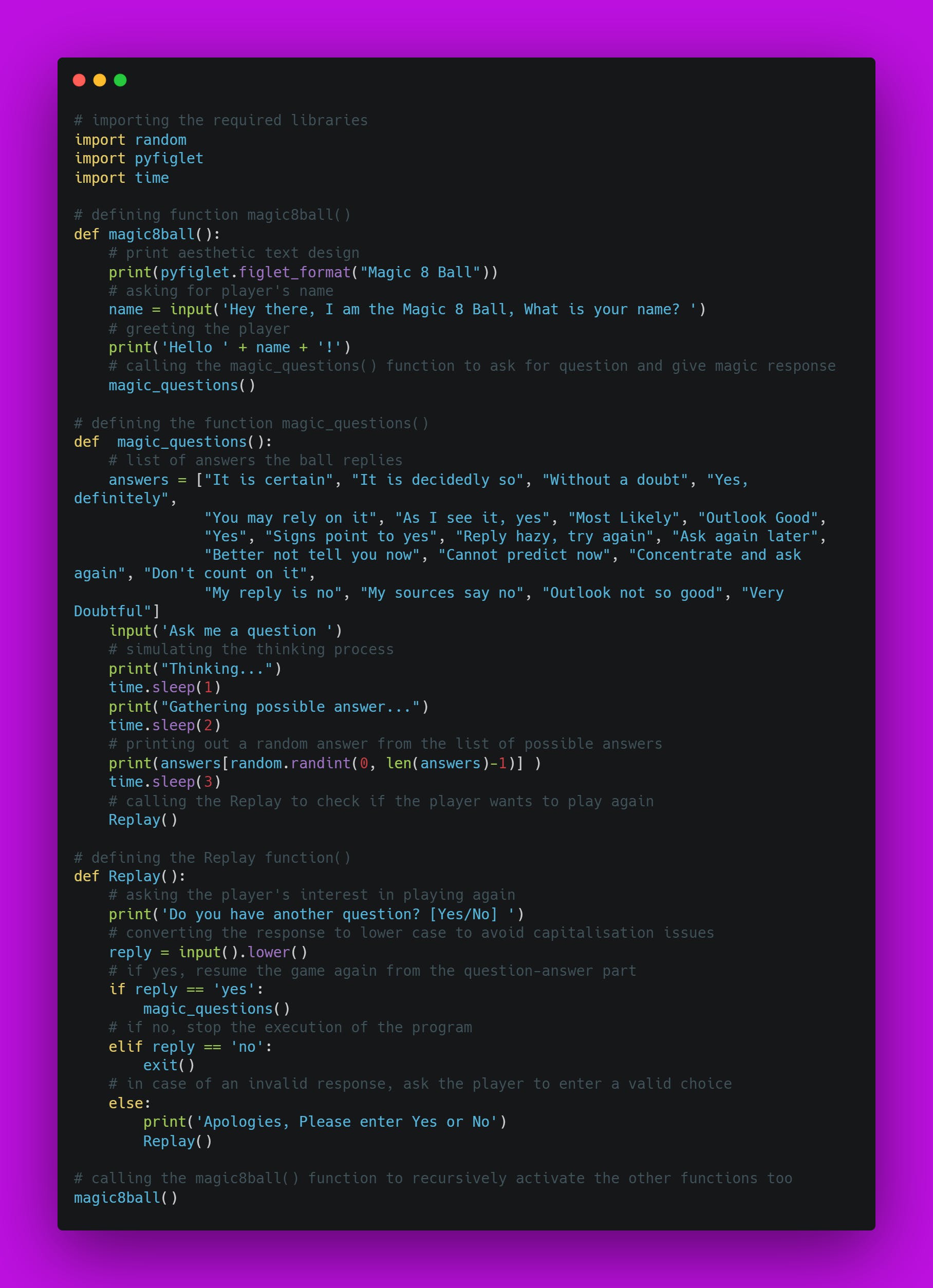 Let's try the game out!

Output for the Magic 8 Ball game🎱 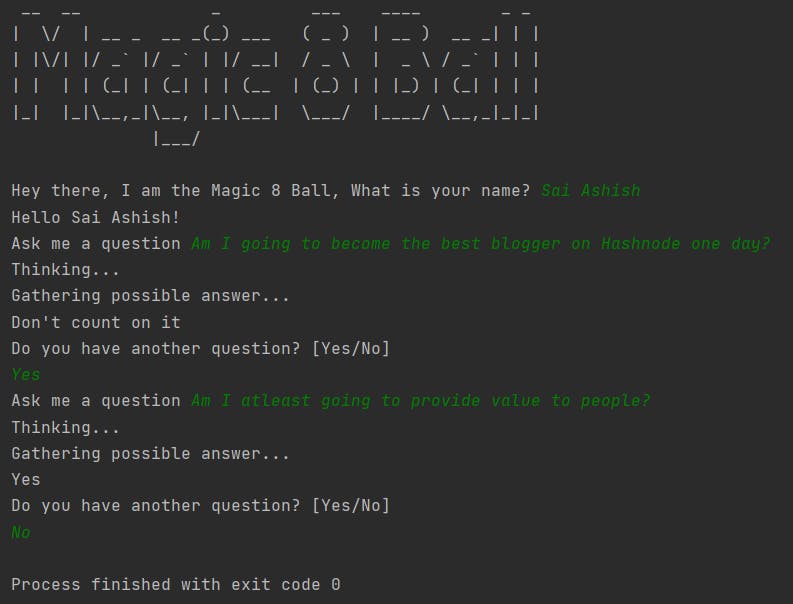 That was demeaning 😂 Atleast, my articles would provide value to the amazing people out there 💯

In this build, we've extensively used the power of recursion. We've divided our program into small chunks, each to carry out a particular task. In addition, we've recursively called functions within functions to kind of automate the flow of our program. Instead of a loop, we directly call the magic_questions() function if the player wants to play again.

You can directly download the Source Code to this build can be downloaded from my GitHub Repository.

And while you're at it, consider giving this blog the maximum love you can and I promise to give you such value bombs every week 💣 Until then, take care 🙋🏻‍♂️

If you liked this article, I'm sure you'd love these too: